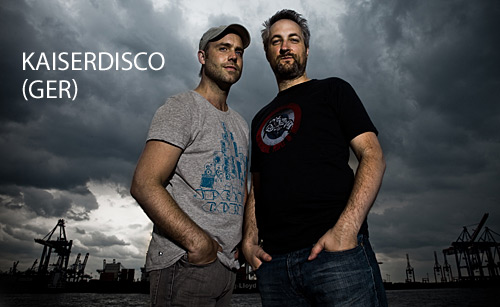 This weeks DIRTY MIND MIX is from the hottest duo in the House biz: Kaiserdisco. The two Germans present their 2nd mix on our radio which can be best described in two words: just phenomenal!
Tune in at www.dirtymindmusic.com

About the artist:
Both Frederic Berger & Patrick Buck are true boys from Hamburg, Germany. They are in their mid 30´s and have had single careers of their own for more than 10 years, but when they joined forces things began to simmer. Kaiserdisco signed to MBF in 2008 and have since then accumulated half a dozen top chart positions on Beatport and international fame. Their tracks are played by the biggest DJs such as Format:B, Richie Hawtin, Laurent Garnier, Dubfire, Tiefschwarz, etc. Since then Kaiserdisco have been gigging in clubs and festivals around the world. Their album „In no one's Shadow“ (MBF CD004) featured 10 brand new exclusive and unreleased trax, as well as their chart breakers „Aguja“ and „Carachillo“ and was accompanied by a video and an album tour.