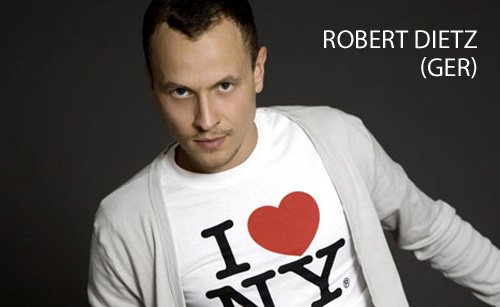 This weeks DIRTY MIND MIX is from German DJ & Producer Robert Dietz. He presents us a special Amsterdam Dance Event (ADE) mix. The 90 min. house set is typically Robert: energetic, hot, awesome! Tune in to that firework at www.dirtymindmusic.com

About the artist:
Robert Dietz cut his clubbing teeth on the Frankfurt scene dominated by the likes of Sven Väth and Luciano, but the flourishing artist leaps all musical boundaries. His only guiding principle can be summed up in words of Chuck Roberts: House is a feeling! Beatportal hailed Robert as one of 2009’s “Artists To Watch” saying: he came out of nowhere to land on some of the scene’s hottest labels. And it is true that Robert has made a major impression on A-list imprints including Cadenza and Cecille. He always took the ethos of minimal with a grain of salt, preferring to have richness and emotional texture in his tunes rather than simply follow a trend. It is this mindset, coupled with his superb sense of what it takes to make a club explode, that provides the impetus for Robert’s productions – and his packed deejay schedule. Robert is truly one of the best House DJs at the moment, and if you hear his sets, then you know why…

Do not miss Robert Dietz during the ADE 2011! See our party recommendations.