What is DIRTY MIND MUSIC?

Their Soundcloud page is Your Streaming channel dedicated to House Music. Here you will find great mixes from Deep House to Tech House from DJs around the globe: www.soundcloud.com/dirtymindmusic

From 2008 to 2016 DIRTY MIND MUSIC was a well-known Internet Radio for Housemusic. Now we are concentrating on our Blog and Soundcloud channel. To receive our updates, music news and fresh tunes & mixes, please subscribe to our Blog at the end of this page and follow our Soundcloud channel. 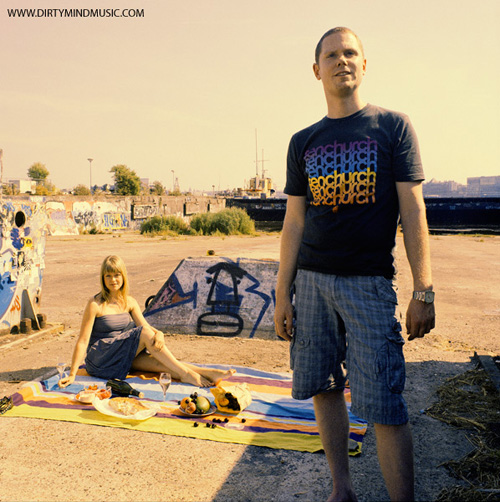 City I live in:
Berlin -  an exciting city! Not only because there is so much happening, but also because of its crazy history. You still feel it everywhere and it only happened a few decades ago.

What I love about DIRTY MIND MUSIC:
You can reach electronic music lovers from all over the world! When we had the radio, we had listeners in 100 different countries, including South Africa, Bermuda, Colombia, Peru, China, Thailand, New Zealand, Russia, Saudi Arabia. Now our Soundcloud channel does the same. Amazing what technology can make happen today. I mean, this is the true spirit of House Music: no boundaries - everybody is welcome! And when we get from fans nice feedback, then we know why we are doing it.

How DIRTY MIND MUSIC started:
I could not find a radio station, which constantly plays good and interesting house music. So I created my own station as a very ambitious hobby project. Our radio was made out of passion for electronic music. I am glad that lot of people with different skills supported my idea. But in the on demand streaming age of Spotify and Co an internet radio was more and more hard to run. That is why we decided after 8 years to switch to an on demand streaming platform as well. Now our listeners can play their favorite mixes whenever they wish.

Best place in Berlin for partying?
Definitely Berghain! As I am a house music lover I prefer the Panorama Bar, the house floor above the main hall. Its very hard to get into the club that is why the crowd inside is so special. Panorama Bar has no Go Go Dancers or any fancy stuff, just this raw architecture and a massive PA. And when it's already morning or during the day and the light jockey opens the blinds for a few seconds, the crowd explodes because of the sunlight hitting their moving bodies. These are special moments!

City I live in:
Berlin. The city of music, culture, art, nature, endless club nights and everything in between! Even though Berlin is a huge cosmopolitan city, it is so relaxed and laidback. Home <3

What I love about DIRTY MIND MUSIC:
The fact that DMM played in its radio time one killer track after the other. A lot of the tracks we played were first heard at a party or in a DJ mix from our favorite DJs. We fall in love with the tracks, find them, buy them and add them to our radio. Every track has a little story. It is nice way to remember those moments again. Now the same thing is happening with the DJ mixes on our Soundcloud page.

How DIRTY MIND MUSIC changed after I participated:
I joined DMM officially in 2010. Back then we played lot of progressive and vocal house in the radio. It was very nice and sweet, but we needed a fresh kick! I'm a girl who prefers tech house, techno, minimal, pumping beats and fat bass, so I guess this was the time when DMMs music style changed towards the techy side. This was also the change for Joe to play as a DJ more towards tech house. Listen to his sets now :)

Best place for partying outside Berlin?
IBIZA!! The paradise on earth! You have the best clubs with unbelievable soundsystems, best DJs, like-minded people and the great athmosphere. You have the sun, sea & beach! You have daytime parties and you can go loco during the night. Ibiza is the mecca for electronic music lovers, when you come to the island you can really feel the energy! :) You have to experience this!

City I live in:
Blackie City (I think some ugly humans call it also „Berlin“)

What I love about DIRTY MIND MUSIC:
The stop button, so I can finally get my 18 hours of beauty sleep!

How it feels to make a career from an injured Amsterdam street cat to a superstar in posh Berlin district Prenzlauer Berg:
Pawsome!

Feel free to come and say hello if you spot one of us, we love to get in touch with music lovers!

After allowing radio stations to wear his nerves over too many years, Joe Landen in summer 2008 decided to set up his own station. This resulted in DIRTY MIND MUSIC – a free Internet radio station dedicated solely to the best of electronic music, or more precisely: to house music.

Joe runs the Internet radio as an ambitious hobby project, supported by many friends, DJs and artist managements. His regular occupation actually is that of designer. But his taste in music is now spreading across the entire globe at an incredible pace with the aid of Internet radio provider "live365". "I have a broadcasting package with webspace at a really fair price, which I am able to feed with audio content from my laptop at home," Joe explains. "Live365 takes care of the technology and the community, I arrange the radio programme".

And he does so with success: Listeners give DIRTY MIND MUSIC a score of 9 from 10 points. After only 3 months, the radio was already ranked 5th amongst 115 house stations on live365. After 11 months, it reached position no 2 of meanwhile 121 stations, making DIRTY MIND MUSIC one of the top newcomers on live365. And all without any budget for advertising.

The radio starts to get attention in the music biz: in january 2010 the exclusive mix from DJ Martial White becomes featured mix on mixcloud. From march to october 2010 DIRTY MIND MUSIC is the only featured station in the house sector of the live365 website. The global fan base grows and grows, including the legendary DJ George Morel and Founder/CEO of Digitally Imported Ari Shohat.

And where are the roots of this success? Well, of course in the music selection. "There are many radio stations and house music stations, but I have not once come across one that plays only the best house music on a consistent basis. Of course they all claim to do so, but seriously, if you have a listen to a house station, the first song might be quite good, but the quality deteriorates with the second or third at the latest, it becomes too commercial, too uncool or even leaves the house genre entirely. We play the full range of house: vocal, uplifting, progressive, minimal etc. And only songs at a high artistic level, not simply boom boom." That appeals to people, not only the in-scene crowd, but also listeners whose taste is "ordinary" music and perhaps for the first time learn what house music really is – and that it definitely does not include Scooter.

Joe has been part of the electronic-music scene since the early 90s and has been able to establish many contacts over the years of which he now benefits. "Many DJs, record labels and artist managements supply me with the latest music productions and above all with DJ mixes. Every week we have a new “Dirty Mind Mix” in our programme, by well-known artists such as Nic Fanciulli, Moguai, Thomas Schumacher, Tim Green, Rodriguez Jr or by newcomers whom we want to give an opportunity to present their sound to an international audience perhaps for the first time. That's why you will even hear DJs like Roy Malakian from Lebanon on our radio station. Most of the contacts with newcomers I get on parties or via social media."

And where does Joe get his musical inspiration? "I visit a lot of parties, so I know exactly what's going on, what's a success and where the trends are heading." Further huge sources of inspiration are Ibiza, the Miami Winter Music Conference or the Amsterdam Dance Event. And these days, of course, the Internet. "I remember some years ago I still had to trek to the record store and laboriously search for the latest vinyls and then spent expensive money buying the entire record that only included one good song." These days, of course, you buy individual songs on download portals, here they are easy to find and the sales rankings indicate what's particularly appealing to the crowds. Moreover, famous DJs publish their current top 10 here. These days you also find an increasing number of brand new DJ mixes on the Internet, by famous artists, including the so-called "tracklist", a list of the songs played. "All these are the sources from which I then select the absolutely best, not driven by any commercial interests. And I don't forget the roots of the music either and also play one or the other classic".

And of course an uncommon website is a must: dirtymindmusic.com not only allows you to switch on the radio, but also offers background information. The online landscape with the funny characters has a special charm, and what's best is: the more listener records are established, the more elements and creatures are added. "Therefore the website is in a growth process just like my radio station."

And what keeps him on going? “House music is constantly changing, it is a very exciting field! The music gives me so much strength and always cheers me up! It's absolutely fantastic to get nice feedback for what you do from listeners around the globe. And it also combines with design, another big part of me. I live in the right time to afford such a project and to reach the whole world, I see it as a privilege to be able to express myself this way”.

Joe is German. At the age of 6 he started to record own funny shows on a tape deck. His favourite band that time is Depeche Mode, the synthy & sample heroes of the 80s. When he was a teenager he published an humorous newspaper at school called “The Miami News”. After getting a video camera he founded the “CTV” video crew with friends. They were a regional success and built up a huge fan base with their comedy, Youtube unfortunately did not yet exist. When he was 18 he discovered his love for electronic music and started to collect party flyers. He established an international network of flyer collectors. For his communication design studies he moved to Stuttgart and began to deejay, produce, and organise parties. He became well-known with his final year project called "The Flyer Phenomenon" (www.flyerz.de), a website which is all about the subject matter of flyers. As a graphic and webdesigner he set up the TWINPIX design studio (www.twinpix.de), which has a number of customers from the nightlife scene. In 2006 he was offered the opportunity to spend six months in Amsterdam, fell in love with the city and shortly afterwards emigrated. Joe founded DIRTY MIND MUSIC as a side-project and worked as a webdesigner in an advertising agency. 2009 he got to know his big Finnish love Ulla at the legendary Voltt festival. From now on Ulla takes care about the radio social networks and is scouting for new tracks and mixes. In summer 2010 the two decided to move from A to B, from Amsterdam to Berlin.

Looking at DIRTY MIND MUSIC it becomes evident that to Joe house music is a passion. His mission: "We just want to be the best house radio on this planet".